Went into the countryside around Duras this afternoon after finishing some important business (shopping for early Christmas présents) to look for something unexpected. En route to Duras we had passed a field containing a few horses, three of which were actually laying on their sides, something l have never seen before. I thought they slept standing up but my dear wife gently disabused me of this notion stating that it wasn’t the least unexpected to see our four legged friends prone on the grass . So l thought l might take a few snaps on the way back anyway.

You guessed it – not a horse in sight. I parked the car and walked up the little path beside a lovely old stone wall that ran alongside the field – nothing. As l moved upwards to the next field, where the wall veered of to the right, there was some movement in the trees on the skyline and this lovely little horse emerged and trotted down the hill alongside the wall and stopped, on its side right next to me and proceeded to ask me what l wanted. It was so unexpected that she spoke English, here in the middle of the French countryside that l was speechless. I eventually managed to splutter out that l was on the WordPress Weekly Photo Challenge crusade to find something unexpected to photograph and was looking for sleeping horses. 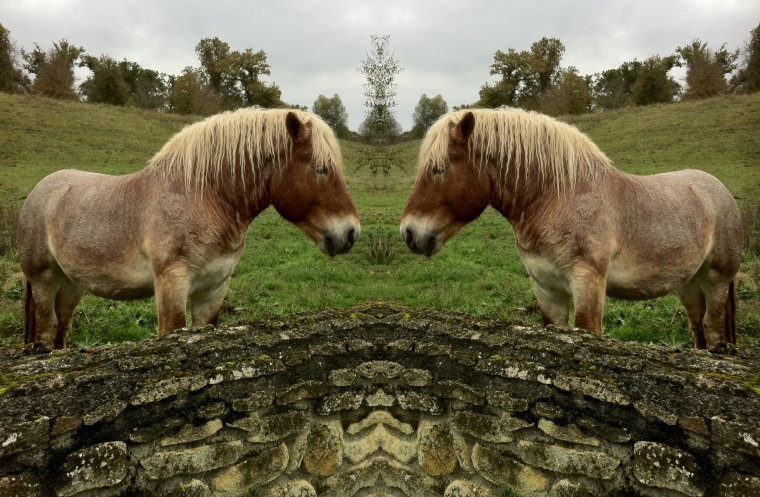 She said that they had been frightened off my an annoying little jack russell terrier called Claude who belonged to next doors farmer, a rather annoying chap who only likes horses if they were on his plate. Margaret, for that was her name, went on to suggest that rather than waste my journey why not take a little vignette of tasteful photographs, which she would gladly pay for by return of post. 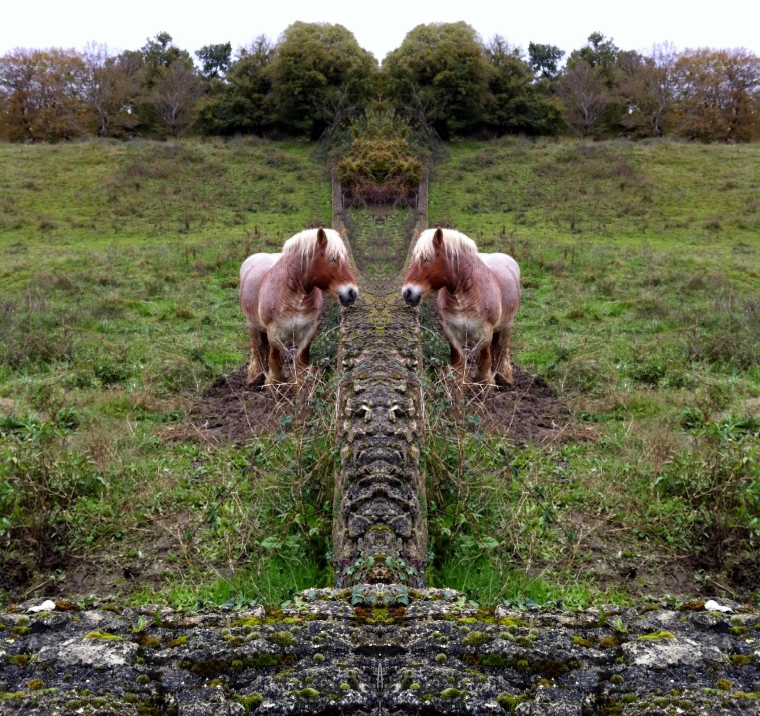 That settled it – she was absolutely right, no point in crying over spilt milk, so l took some very nice close’ups and a full body shot over the wall. She also gave me a lovely little trot up and down her path which, l think, came out quite well. Before taking my leave l asked her if she knew of anything unexpected in the vicinity l could photograph as l was rapidly running out of options and the light was going. She suggested that l try the bus stop in the village where the Dubois twin sisters had been waiting for a number 11 from Neuffons to Monségur for the past thirteen years. Apparently they refused to leave the shelter and rarely showed themselves, except to receive food parcels and timetables from the local population. Margaret said l would be lucky to get a picture as the are very camera shy but it was worth a try.

After exchanging addresses l returned to the car full of hope that finally l might get a picture that would be a worthy contender for this weeks challenge. Well five minutes later l managed to get one of the rarest things, a picture of two young women, albeit their legs, who live in a bus shelter. A local chap who was passing and introduced himself as the Mayor of the village, seemed interested in my story and said that Margaret rarely got to chat in English these days and would have enjoyed the opportunity. When l told him about this weeks challenge he proclaimed that the Dubois sisters story was perfect as nobody in the village except them had any expectation of seeing a bus in the near future, possibly never.

So here is my contribution – WPC – Unexpected (Bus).

(All the photographs, paintings, artwork and other images in this blog are copyright and cannot be reproduced without my written permission and consent)